Author’s note: yes, I accidentally spilled my homebrew all over my 5e Monster Manual. What you gonna do about it? 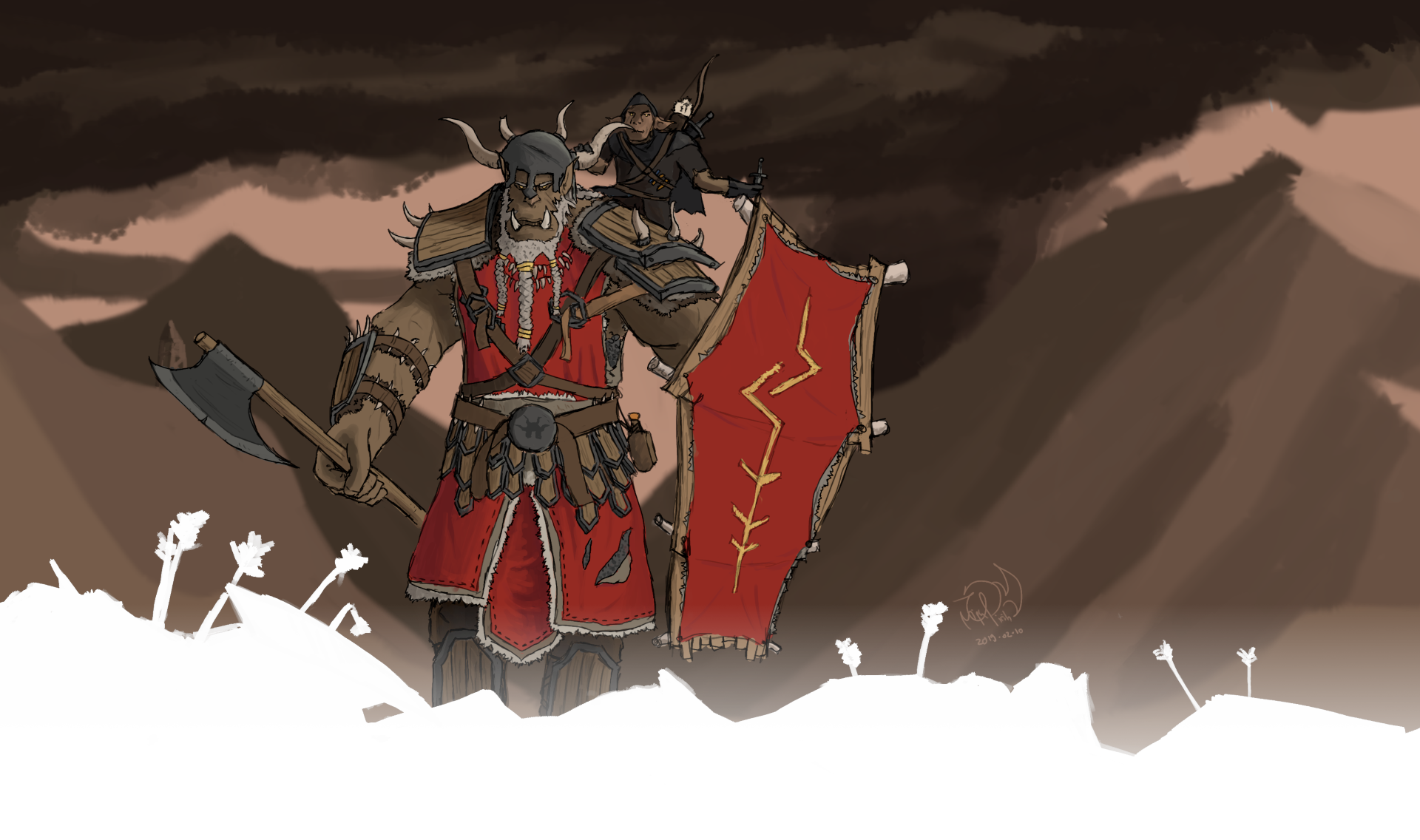 There was a time before orcs. In that time, only men, elves and dwarves walked the world. Their gods felt a sense of pride and accomplishment turning the world, their prized sandbox, into a landscape filled with those who worshiped them.

Not all liked that. Nerull, god of death and darkness, saw the world and — being Nerull — that the men and elves and dwarves need to go. For that, he needed an army: an expendable war force that would do his bidding. With that in mind, he started capturing those of other races and slowly corrupting them into a form that would befit his goals.

Thus, orcs were created: big and strong — as strong as possible! — and with reduced capacity to think for themselves, as Nerull felt this was the easiest way to ensure that the orcs will do his bidding, and to not fear death. There were only a few that were granted cunning and wits, and they had to prove they deserve them.

Nerull unleashed hordes of orcs on the unsuspecting world soon enough. Quick to breed, orc-kind became a force to be reckoned with and a great threat to other races. As such, Nerull and orcs quickly caught attention of other gods. Corellon Larethian stood up for elves, Pelor for humans, Moradin for dwarves. Yet even with their powers combined, the conflict ended in a stalemate: for a long time, they were not able to defeat Nerull and the hordes of orc fighters.

Eventually, the three gods cooked a plan: Pelor and Moradin were to distract Nerull — and with Nerull’s attention directed elsewhere, Corellon was free to mess with Nerull’s creation using means of magic. There was great many tricks that Corellon would try to use, and the first to work was the one that changed the way the orcs are born.

Corellon cast a curse on the orc-kind, that would cause all orcs be born fighters and with little desire for a bond with a child-bearer, in a bid to end the orc-kind by making sure no kid-bearing orcs are ever born again. The curse did not succeed entirely in this way: while it did reduce the number of child-bearing orcs to be born, it did not prevent that from happening completely. While a rarity, child-bearers were still common and fertile enough for the orc-kind to continue.

The curse had some unforeseen consequences that carried a benefit for Nerull as well: with fighters (with few exceptions) not being interested in fucking child-bearers or anyone else, they could finally dedicate all their brainpower to their true purpose: fighting and killing.

Effects of this curse still last — and can be seen clearly — to this day.

Pelor, Corellon and Mordin did not like the new development. While the orc numbers did decrease at first, Nerull quickly dealt with the problem. While he was not able to reverse the curse, he managed to work around it in different ways: by making child-bearers only good for bearing next generations of orcs, and restoring will to fuck at least in those who rose to a place of power within their tribes.

The three gods had to form a new plan. The next worthwhile idea was presented by Moradin: his plans was to grant one of the orcs wits and wisdom — enough to realize that the orc-kind is being taken advantage of. With no better ideas at the time, Pelor and Corellon agreed.

After some consideration, they picked an orc while Nerull wasn’t watching: a promising fighter, named Gruumsh, and followed through with the plan. One day, Moradin appeared before Gruumsh, and granted him wits and wisdom to see how orc-kind was exploited. The relevation made Gruumsh mad, and Moradin was quick to offer him a deal.

He was to convince the orc-kind to rebel against Nerull and free themselves from his rule. As an award for his success, he was promised a godhood and a place for orcs to live — the latter under condition that orcs won’t war other races and expand beyond their lands.

The deal was made, and Gruumsh kept his end of it: he started raising a horde that fought to free themselves from Nerull. His campaign was a great success, since most tribes didn’t appreciate being used by their creator. Not all orcs wanted to join him in fight against Nerull and even raised arms against him — but at the end of the day, with almost all the orc-kind under his banner, the tribes resisting the freedom were defeated. The orcs were finally free from Nerull.

But the gods had no intentions of keeping the promises they made. When the war against Nerull was won, Gruush waited and waited to be given godhood, he waited for Moradin to show up and make good on the promise. But that didn’t happen.

Eventually, it was Nerull who came to him in the darkest hour of the night and told him the truth: that the gods he made a deal with were not planning to give him neither the godhood, nor the lands for orcs to live in. Gruush didn’t believe him at first: he still remembered very well that Nerull has made orcs to serve him and his evil means and thought Nerull was trying to use him for his intentions. Nerull replied by irrevocably granting Gruush the godhood he desired, and said: ‘‘Then come with me, and see it for yourself.’’

This didn’t sit well with Gruumsh: he let out a mighty and furious bellow, cursing all other gods for their treachery. He took his spear and started whacking at the map of the world until it started breaking into pieces, wowing that the orcs will wage the war on everyone forever — a promise the orc-kind has certainly kept well to this day.